Founded on December 25, 1980, the Communist Ghadar Party of India (CGPI) is an organized detachment of communists who have devoted their lives to the liberation of India and to the emancipation of labour on the world scale.

The doors of the CGPI are open all those who wish to make revolution the mission of their lives — who agree to implement the program, work in one of the party organizations and pay monthly dues.

The work of CGPI is based on the theoretical thinking of Marxism-Leninism and guided by contemporary Marxist-Leninist thought. Contemporary Marxist-Leninist thought is the summation, taken in general form, of the experience of the application of Marxism-Leninism to the conditions of socialist revolution and socialist construction, to the struggle against modern revisionism and capitalist restoration, against fascism, militarism, imperialism and medievalism. It is not the final form of Marxism-Leninism under the economy, empowerment of the people and the democratic renewal of India.

Come all who are concerned about the fate of out people, our ancient civilisation! Let us raise the banner of liberation, of deep going transformations! Let us build the revolutionary united front around this fighting program!

Revolution is our right and duty. To fight for the democratic renewal of India is the immediate task.

Let us unitedly take up this task so that the crisis can be ended and the door opened for the progress of society! 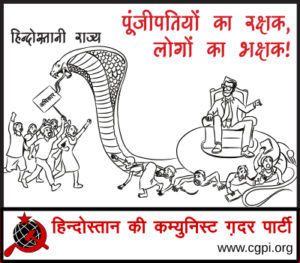 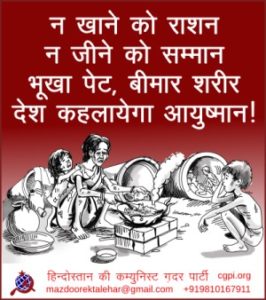